Romanian immigrants have been given such a bad reputation in Europe that the Romanian government has ordered for an expensive publicity campaign to improve the country's image abroad. Some see it as a hidden message- that not all Romanians are Roma. Read more...

Romanian immigrants have been given such a bad reputation in Europe that the Romanian government has ordered for an expensive publicity campaign to improve the country's image abroad. Some see it as a hidden message - that not all Romanians are Roma.

The campaign is targeting Spain and Italy in particular, where the Roma communities make up the largest of the immigrant groups, with 500,000 and 700,000 inhabitants respectively. According to the Romanian government, they need to make an "effort in communication to correct the mistaken perception of Romanian citizens with alternative information to that of the sensational media debate based on the violations of some citizens originating from Romania".

And they're not holding back on the budget. Notorious New York agency Saatchi & Saatchi have been commissioned with a comprehensive "360°" campaign, which will include posters, a three-spot series, a website and also conferences and meetings to promote research that presents Romanian people as beneficial to Spanish society. A similar campaign, called "Piacere di conoscerti" (Pleased to meet you) is planned for Italy too.

In Spain, Romanian "gypsy" associations quickly noticed that there were no Roma people represented in the adverts. According to them, the message that the government is trying to get across is that "not all Romanians are Roma".

One of three videos from the campaign "Hola, soy Rumano".

Posters from the campaign 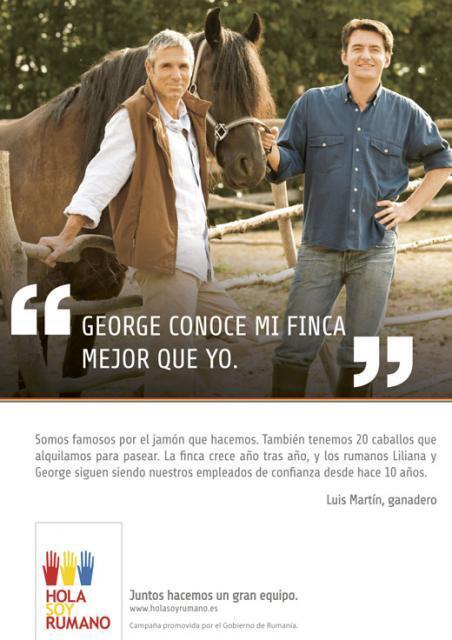 "George knows my farm better than I do." 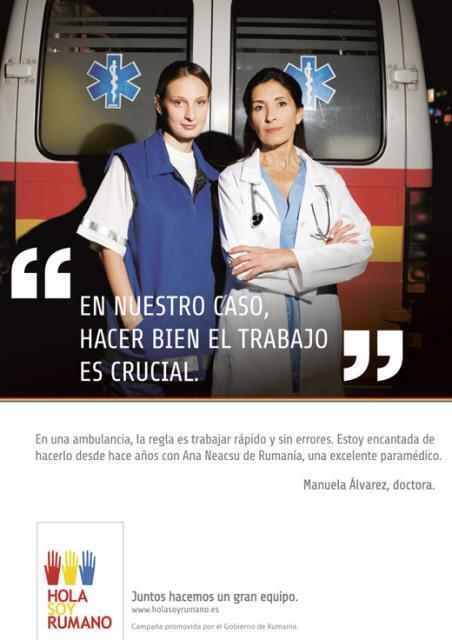 "In our case, doing a good job is crucial." 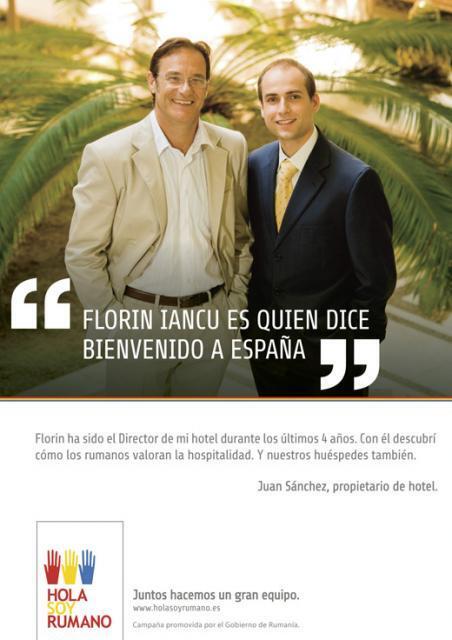 "Florian Iancu is someone who says 'Welcome to Spain.'"

Videos from the Spanish campaign

"Here Romania's still not considered as a part of Europe"

Ignacio is a language and literature professor. He lives in a suburb of Madrid.

There are three major immigrant communities in Spain - Romanians, Moroccans, and Ecuadorians. And Romanians have a particularly negative image. The media have a lot to do with that. For every piece of bad news, whether a rape or a burglary, Romanians are put to blame - and that's what influences opinions.

Romanian people are immediately branded with delinquency and associated with Eastern European mafia groups - drugs, prostitution, burglary etc. They're also automatically linked with extreme poverty. If you mention 'Romanian' to Spanish people, they think of a poor mother begging on the street with her children or baby.

I think for a lot of people here Romania's still not considered as a part of Europe. A large part of the Romanian community is poor. They work in sectors that aren't very visible, like construction, and are often unregistered workers, living in precarious situations. The instability doesn't help them with creating a positive image, but instead incites racism. Ecuadorian people for example, are viewed in a better light because a lot of them work in services, as waiters for example, so the Spanish have got to know them.

On that basis, any attempt to improve the image of Roma people is welcomed."

"The government can neither say that Roma people are not Romanian, nor that all Romanians, Roma included, are respectable"

Jean-Pierre Dacheux is a member of the Romeurop group.

What this campaign is trying to get across is what is not said: "Don't judge all Romanians like you judge the Roma from Romania".

It's easy to work out what the Romanian government is doing. Well before Romania became part of the EU large numbers of Romanian nationals came looking for work in the Iberian Peninsula. Romania has every interest in facilitating the reception of its people, now able to move freely around the 27 states of the European Union.

Equally, the fate of the Roma people in Italy has worried Romanian leaders. They fear that if extended, these policies would affect all Romanians, Roma or not. It's true that people all over confuse Roma and Romanians; if all Roma people from Romania are Romanian, then all Romanians are Roma.

Don't forget that the term "gypsy" is synonymous with slave in the Romanian provinces of Moldova and Walachia, where people were forced into slavery up until the 21st century. The campaign would be more credible if contempt and disdain were not the dominant reactions to the Roma in Romania itself.

Europe would not be Europe without the Roma people, which make up the largest minority community (10 to 12 million) and are the most diffused across the European states. The question that the campaign poses is essential - do all Romanians, all of them, have a place in Europe? The answer is that the Roma of Europe have, alas, yet to be considered as citizens like any others."