Many websites have fallen victim to an X-rating in India, but one that's yet to be branded is homemade comicstrip Savita Bhabhi. The formula is simple (a voluptuous young woman who finds herself in compromising situations), but the social implications are slightly more complicated. Savita Bhabhi is an experimental mix of both old-fashioned values and modern concepts. The leading character is a married woman - particularly evident because her the part in her hair is died deep red and she wears a gold pendant (equivalent to a wedding ring). She also wears the traditional sari and the red dot between her eyebrows (the bindi).

Savita's husband is often away, so to escape the boredom she sleeps with various passers-by. For this bhabhi (which means sister-in-law), nothing is taboo, not even incest - which is a subject that Indian webusers seem to be particularly fond of. One page of this volatile saga is published every day and translated into nine national languages. The site has already provoked complaints, according to the Information and Technology minister, and could soon face censorship. No doubt its 30,000 subscribers won't be too pleased.

A strip from "Savita Bhabhi"

This is a just a very tame example of the comic strip... 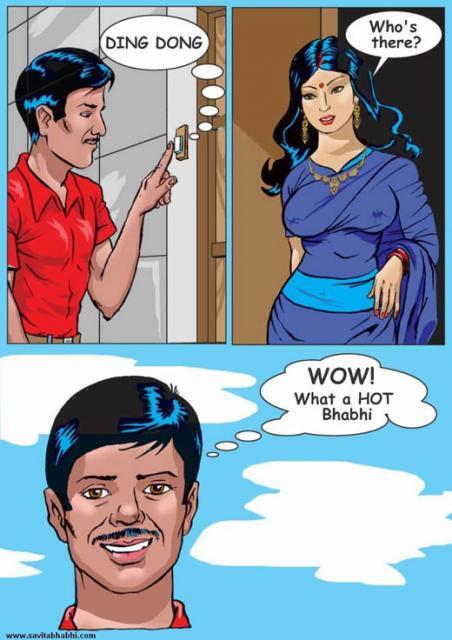 From the Savita Bhabhi site.

Arnab Das, 33, is the co-producer of an Indian news channel

"It can... have bad consequences on traditional Indian values"

Renuka Renuka Singh is a sociologist at the Jawaharlal Nehru University in New Dehli.

By having a bhabhi (sister-in-law) as the main character, Savita Bhabhi is very provocative. But by doing so, it forces people to question what outward appearance is about. More than 70% of the Indian population is still very traditional. Yet the way you look is not always representative of your lifestyle. You can wear the sari and have a traditional image, but have a very active and even libertine sex life. And that is what Savita Bhabhi illustrates in some ways. What happens behind the curtains is very different from what social reality shows. People know about it, and have always known about it, but it is not something that is talked about.

I don't think our society is ready for that yet. Even though the young generation is a bit more straight-forward, discussing your sex life openly is still taboo. On one hand, Savita Bhabhi is a cartoon; it's a fantasy made out of drawings. Therefore it doesn't completely violate our cultural reality. Showing real people would be much more aggressive towards our traditions. On the other hand, even though it is "only" a cartoon, it can still have bad consequences on traditional Indian values. Trust is very important in our society. Relationships are based on trust. By depicting a married woman having sex with whoever, Savita Bhabhi could break this trust. Also, it teaches men the wrong idea by making them think it is okay to reduce women to sexual objects."