US Army photoshops images of soldiers killed in Iraq

The faces of the men in these photos, distributed on 18 September by the US Army, have been cut and copied onto the same body using photo editing software.

The faces of the men in these photos, distributed on 18 September by the US Army, have been cut and copied onto the same body using photo editing software. 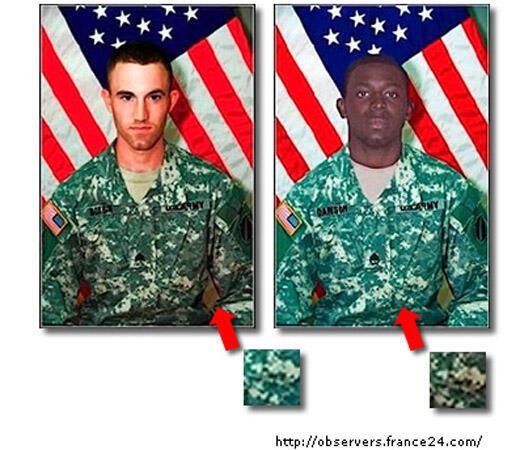 It was photo journalist Bob Owen, manager of San Antonio Express-News agency, who noticed the ploy. Associated Press, the agency that had distributed images, immediately withdrew them, agreeing that they had been "digitally altered".

The photos are of Darris Dawson and Wesley Durbin, who the army confirmed had died near Iskandariya, south of Baghdad, on 14 September. Very few details were given about their deaths. The Department of Defense website reported that they died "of wounds sustained in a non-hostile incident". CNN later reported that when questioned about the affair, the army disclosed that two people had been shot and killed by another soldier. The staement read: "We do know one soldier, a fellow noncommissioned officer, allegedly opened fire and mortally wounded his squad leader and fellow team leader."

The only difference between the two photos is the faces of the soldiers, and the names printed on their uniforms. Their poses, body forms, the placement of the US flag and their camouflage uniforms are identical. It seems that the image of Sergeant Dawson's head was placed on Sergeant Durbin's body with the use of Photoshop or other photo editing software.

The US Army is yet to give any explanation for editing the images.