Tame Iti, the Maori who terrorises the Kiwis

All singing all dancing, tattooed and pierced from head to toes - who would have thought any indigenous New Zealander would end up in the docks for terrorism-related charges. But today, that's precisely what happened to 18 of the Maori community. Read more...

All singing all dancing, tattooed and pierced from head to toes - who would have thought any indigenous New Zealander would end up in the docks for terrorism-related charges. But today, that's precisely what happened to 18 of the Maori community.

Maori activist Tame Iti is best known for baring his behind at a procession and shot-gunning a New Zealand flag in the name of Maori sovereignty. A social worker and musician, he made a song, called "Terra-ism", about the state "terrorising" the indigenous people of New Zealand. Yet, today, he finds himself in court facing the exact same charge.

Along with 17 others, the tattooed 56-year-old faces firearm charges for running military camps in North Island's northeast. Though originally arrested under the controversial Terrorism Suppression Act after the police raided the Maori area of Tuhoe in October 2007, charges for terrorism have since been dropped. Iti, who's been on bail since the arrest, is famous for campaigning for the Maori people, with the aim of returning the Tuhoe area to them. 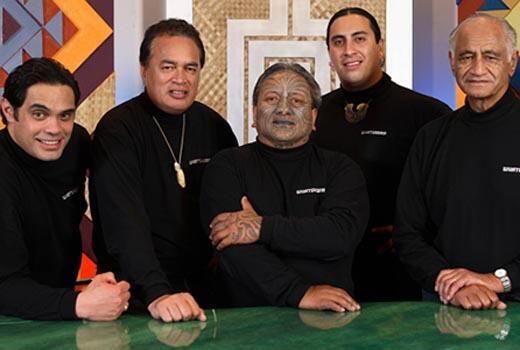 Tame Iti has also worked as a television presenter on a programme for male social problems, on Māori Television, a bilingual TV channel.

The Open Project, a cultural music website, made this video of Tame Iti, speaking about developing traditional music, in 2006.

"You can go and play rugby and drink pints in the pub like Kiwi people do, or you can choose to be staunch about being Maori"

Karl Burrows is a Maori currently living in the UK. He runs a company called Manaia, which teaches Maori culture and puts on traditional performances in Europe and the Middle East.

I met Tame Iti a couple of times. He's someone who, to highlight his cause, does quite provocative things. But as he works for Mauri sovereignty, I see him in a positive way. He's perceived as extremist by some areas of the country. But people I've spoken to who are involved in these "terrorist camps", say that they're just young people's camps. They take kids on camping trips in the woods, and they take firearms because they go hunting, as traditional Tuhoe people would. It's done in an area that has managed to remain indigenous. The state only ever enters that area rarely and usually with troops.

Me I'm Maori, but not from Tuhoe, which is an area that remains traditionally Maori, I am Ngati Maru from Taranaki. We live in the modern world, but our cultural heritage is still very important to us. I read recently that 50% of Maori people now marry non-Maori people. But we still hold on to our history and culture despite the genetic mix up. For me it's a personal thing. You can go and play rugby and drink pints in the pub like Kiwi people do, or you can choose to be staunch about being Maori.

Things have certainly improved for us recently. For example, my mum wasn't allowed to speak Maori at school - now you have schools that teach entirely in Maori. There is racism but it's not blatant. White New Zealanders are coming to terms with things now, and Maori people are more confident to speak their minds. Things like this happen every now and again. But they give an opportunity for both sides to refocus. The reality is that there's no armed conflict. People in the country really believe these issues can be sorted out by talking and discussion. The Tuhoe community is asking for sovereignty now - for a similar system as Wales has in the UK. This never would have been talked about even a year ago."

The documentary "Tuhoe - A History of Resistance"