Russian blog review: "Looking for nuclear war? Bring it on!"

A photomontage circulating on russian blogs.The crater is on Poland. The Georgian War and the subsequent missile defense deployment in Poland and the Czech Republic have stirred up Russian bloggers. Many vent their frustration through hawkish comments and nostalgia of Soviet military might.

A photomontage circulating on russian blogs.The crater is on Poland.

The Georgian War and the subsequent missile defense deployment in Poland and the Czech Republic have stirred up Russian bloggers. Many vent their frustration through hawkish comments and nostalgia of Soviet military might. 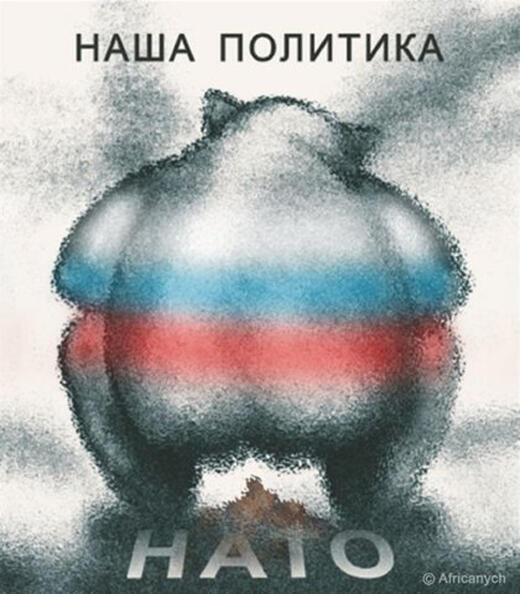 "Looking for nuclear war? Bring it on"

Igor Frolov, journalist and veteran of the Afghan war.

It's time to stop waiting nervously for them to start loving us. They never will. We have to become the people they paint us. But we must preserve our justice at the same time. Our next moves should go as follows: don't lose the tempo. If Yuschenko wants our military ships to ask for permission to enter Sebastopol, we should immediately start the procedure of claiming back the city that never was an administrative part of Crimea. The claim to return Crimea would be the next move.

After that we should introduce a security law, which would guard Russia, its borders, its buffer zones of interest. On this base we should start a sea blockade of Georgia (as a dangerous state), search NATO vessels for arms, control Georgian airports (or destroy the runways), arrest the Georgian president and other high officials and put them on trial in Ossetia.

Then we should advise those who it concerns that any increase in military power - such as building an anti-missile system in Poland - would be punished by destroying these excesses with spot or carpet bombings, depending on the situation.

Then we should demand to exclude all the countries bordering with Russia from NATO. If they refuse, we should aim missiles at Europe and create military bases in Cuba, Venezuela and all the American countries with which we can reach agreements.

All international media should broadcast a long and detailed speech by our President about our achievements in the liberation and protection of other nations - Bulgaria, Armenia, also Georgia and the whole of Europe - from various invaders; about our role as their champions, about our vision of democracy, about the continental security which we guarantee. It leads to prohibiting other states from interference, at least of the military kind, in European affairs. The clear explanation comes from the provocative role of the US, which keeps stirring up trouble in our continent. This would lead to the exclusion of the US from NATO as an undesirable alien.

To sum up, we should be tough. You want a nuclear war? We're up for it.  Let's see what they say after such a statement.

We should become bad. Only that would stop the bastards who don't understand where they're pushing the world.

That's a little bit chaotic, but I'm just improvising. If we're afraid of the war, like in 1941, it will come. If we're not, it will be a cold war. We are not afraid of the cold; we have fossil fuels.

But our leaders are much smarter than me. We will quietly retreat to our previous positions, and even further, as always. I really want to be wrong about it."

"Are we finally going to install our missiles in Cuba in reply to US missiles in Poland?"

Yuri Jakor is a young political activist in the "Nashi" youth movement. He's the co-founder of the Young Leaders Club of St-Petersburg

"The anniversary of the Prague events of August 1968 has come very much "on time". Understandably, not many in Russia remember Jan Palach [Czech student who killed himself by self-immolation in January 1969 in protest against Soviet occupation]. At most, they recall the fact that our tanks rolled into Prague. Nobody wants to remember the details. The slogan "Respect your own constitution" doesn't tell us much. This is probably due to Russia's perennial legal nihilism, and to its no less traditional memory slips.

But the West remembers, going so far as to compare 1968 with the present situation in South Ossetia. It's evident that the comparison is born out of thin air. The only fact that connects these two events is the presence of Russian tanks. But beyond that, it's rather symbolic. The Prague events showed the world that the Soviet Union was ready to protect its interests and would provide strong answers to those allies who set out for the other camp. Russian tanks didn't roll into the streets of Tbilisi, but the Kremlin doesn't mumble about Georgian territorial integrity anymore. And something tells me that [Moldavian President] Vladimir Voronin and Ukraine's Viktor Yushchenko should rethink their behavior. [Moldova's] Transdnistria province has been wanting to join Russia for a long time, and Crimean separatism can suddenly grow stronger.

BTW - Are we finally going to install our missiles in Cuba as an answer to the American missiles in Poland, or what? "

"It's obvious the US started the arms race, not Russia"

Konstantin Tedeyev is CEO of AKP recruiting company and teaches management at the Urals State Technical University in Yekaterinburg, in eastern Russia.

"I can't understand why the US is trying so hard to place its anti-missile systems everywhere. First, they tried to provide a plausible explanation - some danger coming from the Middle East (though even then Putin pointed out that these countries do not have the kind of missiles the US was keen to protect itself from). But now, after the events in Georgia, which they call "the Russian aggression", Washington has accelerated negotiations with Poland without even trying to cover its real intentions.

I can't understand why the country, which is going through a grave economic crisis and has a huge foreign debt, is trying to start an arms race. It's obvious that Russia will find (or rather has already found) an answer. Negotiations with Belarus about deploying brand new defence systems are already underway. The Syrian president has already agreed on principle to place the Iskander missile complexes in his country. A new base for long-range bombers is planned in the Kaliningrad region, and some say these bombers already land in Cuba.

While it's at least possible to debate who started the fire in South Ossetia. In this case it's absolutely obvious that it's the US who started the arms race, while Russia has been extremely reserved. I'm increasingly coming to believe that the US wants to start a war with Russia for its energy sources but doesn't yet know how to go about it."

"Russia will much sooner be destroyed by economic collapse"

Pavel is a student in Moscow.

Why is everybody so concerned about the radar? NATO has already been on Russia's doorstep for the past 15 years - in the Baltic region. Russia will much sooner be destroyed by economic collapse and top-down power structure. Guys, you never learn. The USSR collapsed without a single shot being fired by invaders. On its own! The mechanics of self-destruction are quite simple: an economy dependent on raw materials, combined with the clumsiness of central authorities and the creation of regional power elites. We have it all at the moment. In Kazan [capital of the Russian Republic of Tatarstan], they're even building a monument to the defenders of the city against the troops of Tsar Ivan IV. Our authorities lost control of the situation a long time ago. Oil and gas have replaced everything else for us. Everything is ready - a single push (oil prices are already dropping, by the way) will lead to agony. Americans don't even need to move a finger; everything will collapse by itself. You are looking for enemies in the wrong place. They are not in Washington; they are right here!"

"The US shouldn’t busy itself with missile defence"

The USA has reached an agreement with Poland about the anti-missile system, and Russia:

1) Invited its friend the Syrian president, who "totally agrees with the Russian position"

2) Said that it "will rebuild the Iraqi oil industry."

On the other side... Who else had a chance to see the rise, fall and resurrection of a great totalitarian empire? I'm talking about Russia. The USA shouldn't occupy themselves with the anti-missile defense, but with freeing the world from oil and gas addiction. But they are lobbied. It's impossible to withstand the money torture.

The ORT TV has finished me, as I was writing this. "Georgia can't count its military casualties. For such a small country, 200-300 soldiers is a very serious loss."

Yes, sure. It's not us, a superpower that can easily spend a million lives. Do they understand on ORT what exactly they're saying? I'm afraid they do."

Poland as seen by a Russian web user