Amateur video of a beating

The harbour of Sidi Ifni, in southern Morocco, was once again blocked by citizens on strike last Monday. This video, sent by one of our Moroccan observers, seems to show that the strike was broken up in a particularly brutal way.

The harbour of Sidi Ifni, in southern Morocco, was once again blocked by citizens on strike last Monday. This video, sent by one of our Moroccan observers, seems to show that the strike was broken up in a particularly brutal way.

According to local media sources, around 300 people had gathered to block the harbour, demanding the release of their co-citizens who were arrested during previous demonstrations. Strikes held in early June turned violent after police attempted to break them up. The atmosphere at Sidi Ifni has been tense for months, its citizens accusing the government of voluntarily reigning in the economic development of their city.

The Moroccan media usually stick to the police and government's official declarations, which is that violent incidents stem only from "a few troublemakers". Online, however, locals have criticized the brutality of police repression. Local web surfers use YouTube to broadcast videos of the conflicts. This type of image is scarce because the city, far from Marocco's economic hot spots, is hardly ever covered by foreign media.

"Blows aren't the only solution"

"Ifni Ifni", who prefers to remain anonymous, was born in Sidi Ifni before emigrating to France, where he now lives. Thanks to the Internet, he has kept in touch with friends back home.

The history of Sidi Ifni is unique. Citizens of the region of Ait Baamrane, where the city of Sidi Ifni is, resisted French colonisation longer than the rest of the country. They also pushed back the Spaniards. Baamramis have always been fiercely independent, and the region is mountainous, difficult to access.

Originally, the port was built to favour Sidi Ifni's economic development. But poverty is such that those who visit Sidi Ifni might confuse it with a decrepit Somalian town. The nearby town of Tiznit is completely different: that's where all the money goes. Construction work on the road between Sidi Ifni and Tantan, launched in 2005, is still in progress.

Today, the Interior Ministry is creating a climate of fear in the city. It has promised that future police interventions will be even more forceful.

I think that one solution would be to create administrative headquarters in Sidi Ifni. [Today, Tiznit and Gulmim are the regional capitals.] The King should order the release of all arrested strikers, jailed in Rabat or Agadir. The State must promise to respect us and stop considering us second-class citizens. We are Moroccan and proud to be. Meanwhile, the army is everywhere and the situation in the city is very serious."

Map of the city 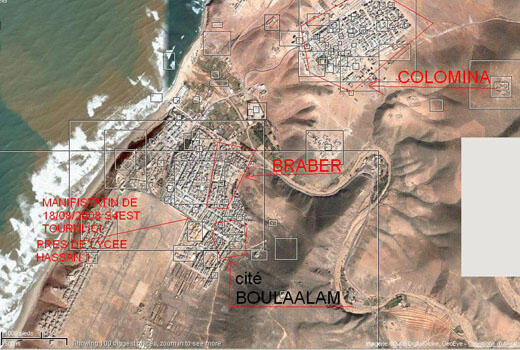 Our Moroccan Observers claim that this footage was shot in the neighborhood of Boulaalam, in the eastern Sidi Ifni, but the location could not be verified. The video was filmed on August 19.